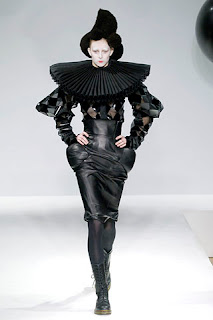 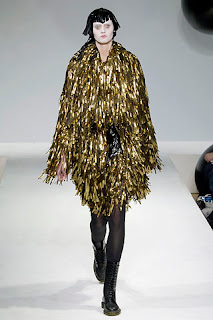 At Pugh's debut at London Fashion Week, he became the "latest addition to a long tradition of fashion as performance art that stretches back through Alexander McQueen, John Galliano, and Vivienne Westwood".  The comparisons to those mentioned designers were instant due to Pugh's ability to put on a show. His palette was strictly black and gold and fabrics ranged from vinyl to mink and there was one dress made of what appeared to be tinsel (the kind you'd hang on a Christmas tree). Checkered boleros and air filled plastic jackets were mixed in with Elizabethan style ruff collars. 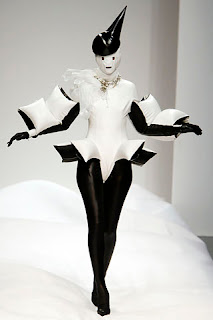 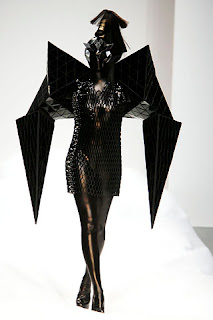 Unidentifiable models walked out onto a white cotton, cloud-like, runway. Faces and hands were covered in latex masks and gloves, with the bodies underneath wearing looks inspired by the 1985 sci-fi film "Legend" by Ridley Scott. Volume, structure, and geometrical patchwork ruled the runway. Black, white, and silver was used in everything from checkered prints to plastic sleeves filled with air to achieve volume. This show had everyone talking about London's new "enfant terrible" but also had critics questioning who'd wear these creations? 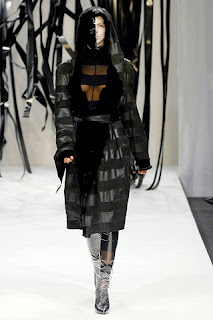 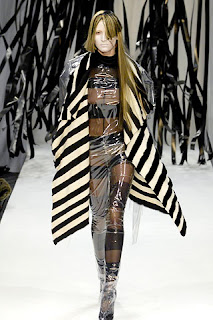 This was THE show of London Fashion Week and the crowd was an interesting mix to say the least. International editors avoided mingling with drag queens and East London club kids while everyone waited an extra 80 minutes for the show to start. As usual with Pugh, they were all in for a show. Inspired by the film "The Wicker Man", Pugh stuck to his usual black and white but added in knits and more fur for fabrics. His plastic and rubber transparent A-line coats garnered applause from the wilder ones in the audience, while critics were pleasantly surprised by chunky striped knit coats and an absolutely wearable belted cardigan with a hood. 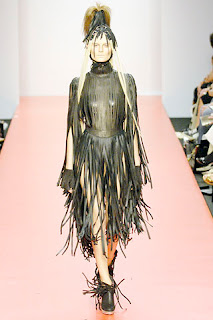 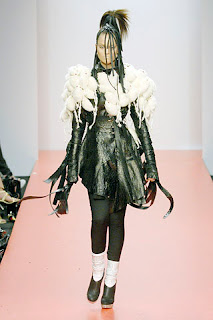 This marked Pugh's first collection under the backing of Michelle Lamy and expectations were high. Pugh traded in his sci-fi standard for a more modern rock n roll aesthetic. Glittering leggings and short, snug dresses walked down the pink runway. Fringe was incorporated into nearly every look and gasp! colour! a bit of pink popped up in the otherwise black and white palette. The glimpse of sophistication from last season was gone and this collection seemed to have no clear direction or point of view. The stand out piece was the mink mice stole complete with red eyes and tails and although everyone enjoyed the spectacle of it, critics were back to questioning who would wear it. 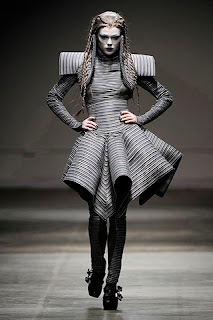 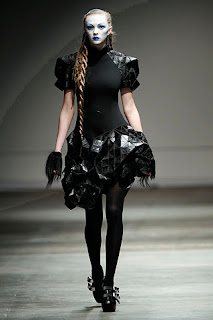 After a relatively disappointing last runway show, Pugh came back with a bang. Supermodel Coco Rocha opened the show in warrior style hair and make up wearing a dress made out of zippers. Safety pin dresses would follow as well as looks using goat hair, flannel, and PVC. Pugh's signature exaggerated shapes, structure, and patchwork were back but in a much more high fashion way. With a typical palette of black, white and silver, the collection was described as "Wizard of Oz meets Predator" and was widely well received. 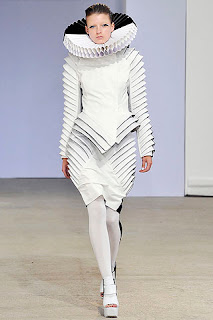 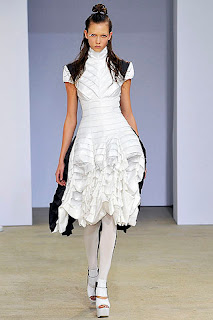 For his first Paris collection, Pugh had 31 sophisticated and cohesive looks to present. Strictly working in black and white, he ditched the leather patchwork, the insanely exaggerated shapes, and the over the top hair and make up. The style was Joan Crawford meets Fantasy/Sci-Fi meets Elizabeth I. The looks were completely white down the front and completely black down the back. There were dresses as well as many separates. The most interesting pieces had knight style armour breast plates and scales, and like a throwback to his first collection, ruff collars. 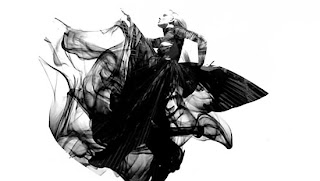 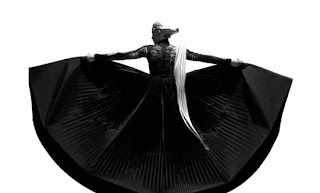 Pugh really surprised his audience this time around. In their seats expecting a runway show, Pugh presented an 8 minute long film presentation of his collection. Tired of being constantly labeled as "sci-fi" he wanted to create a collection that was from "under the earth, not from a spaceship". The palette was black, grey, and hematite and the looks shown in the black and white film achieved elegance and movement, unlike his clothing ever had before. Pugh decided to present the collection in  film because he wanted to be able to showcase the volume and fluidity of the garments in a way he deemed impossible to on the runway. The warrior woman of Spring '08 was gone, and instead of aggressive, his clothing seemed protective and feminine. 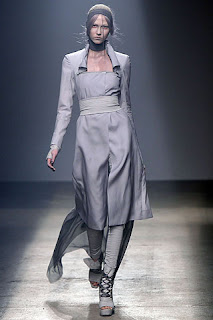 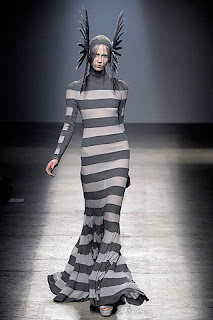 Pugh continued to move away from super structure and used soft, flowing fabrics like chiffon. There was a lack of volume in the refined looks, which fit close to the body. There was hardly any PVC in sight! Pugh used shades of grey to create an overall romantic look. The collection was still futuristic but in a post-apocalyptic princess sort of way. Opposed to his often alien inspired style. This was clearly his most mature and sophisticated collection to date, and the first with serious commercial appeal. 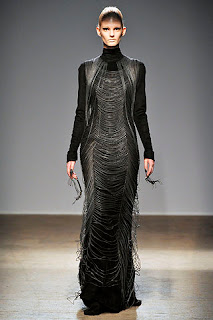 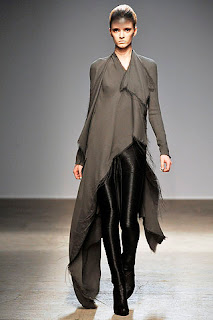 The days of Pugh's alien/predator looks seemed like a distant memory when his art deco inspired collection hit the runway. Using chiffon, cashmere and leather he infused a bit of classic Hollywood glamour into his own unique style. Weaving and crochet was used in several looks, with military green being added to his black and grey palette. Stiff neoprene backed leather suits and jackets were done in a very chic and timeless way. It was nice to see Pugh continue to design clothes for the 21st century. 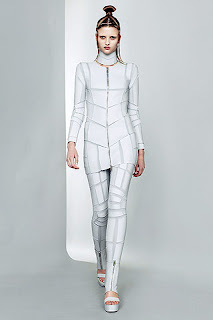 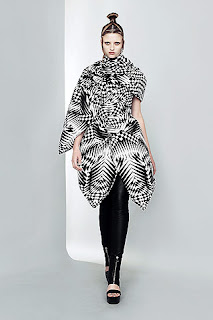 Once again, Pugh surprised his audience with a film presentation of his collection. Model Kristen McMenamy showcased the clothing in the 11 minute art house style film. Critics were mostly disappointed in the presentation saying they could not properly view the clothing, calling the film "sterile and dark". The palette was typical Pugh with black, white and silver, and included some crazy geometric prints. Scales of rubberized neoprene were used in many of the garments giving it a sci-fi edge but done in a very chic way. 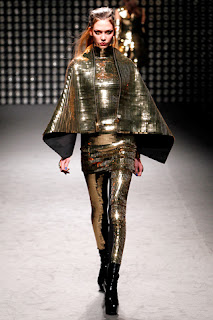 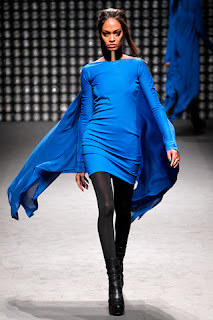 Pugh took it back to the runway for a Matrix meets Joan of Arc collection. He showed what he can do best in molded leather dresses, exaggerated cowl necks, and a lot of broad shouldered silhouettes. He had fun with zippers in the opening looks using them to create crosses on jackets and dresses. His new love for fluidity and movement was apparent in silk chiffon dresses which appeared weightless flowing down the runway. He shocked the audience with his use of cobalt blue and gold, and nobody was disappointed with the burst of colour and glamour. Critics now call him the "King of Gothic Glamour".

Email ThisBlogThis!Share to TwitterShare to FacebookShare to Pinterest
Home
Subscribe to: Posts (Atom)
"The struggle between lightness and darkness"

- Gareth Pugh on his designs